Radio giant John Laws said he was ‘lost’ when Caroline – his ‘princess’ and wife of more than four decades – died last week.

On an overcast Tuesday morning at a small stone church in Sydney’s eastern suburbs he found some comfort in the warm embrace and kind words of others.

Russell Crowe hugged the broadcasting legend as he stepped slowly out of a silver Rolls Royce at St Mark’s Anglican Church in Darling Point.

The acting great then spoke of his relationship with the couple and the love they shared for almost 70 years.

Russell Crowe adjusts radio legend John Laws’ tie as he arrives at the funeral for his wife Caroline, who died last week aged 82 after a four-year battle with ovarian cancer 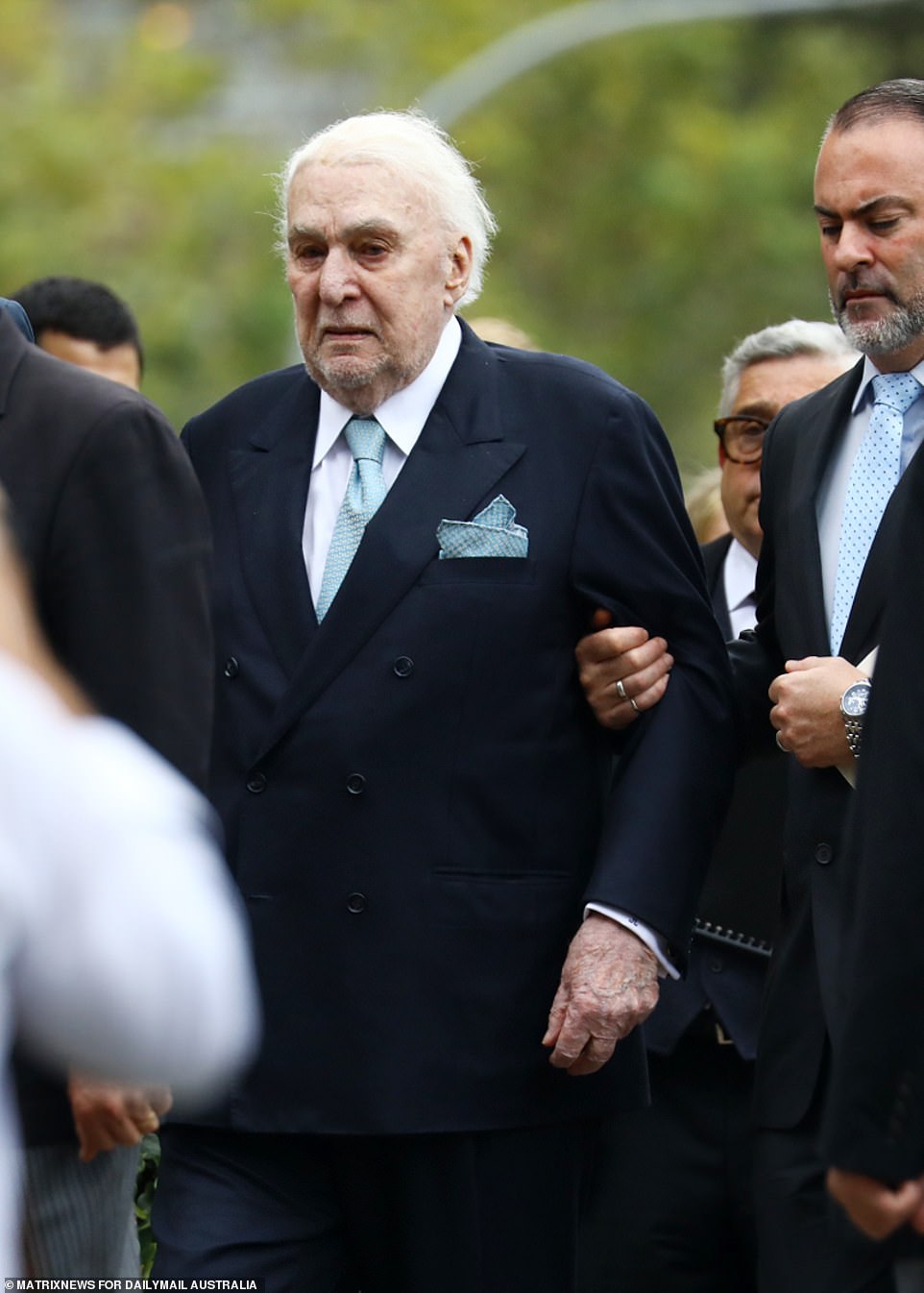 A devastated John Laws at the funeral of his wife Caroline, whom he affectionately named ‘The Princess’ 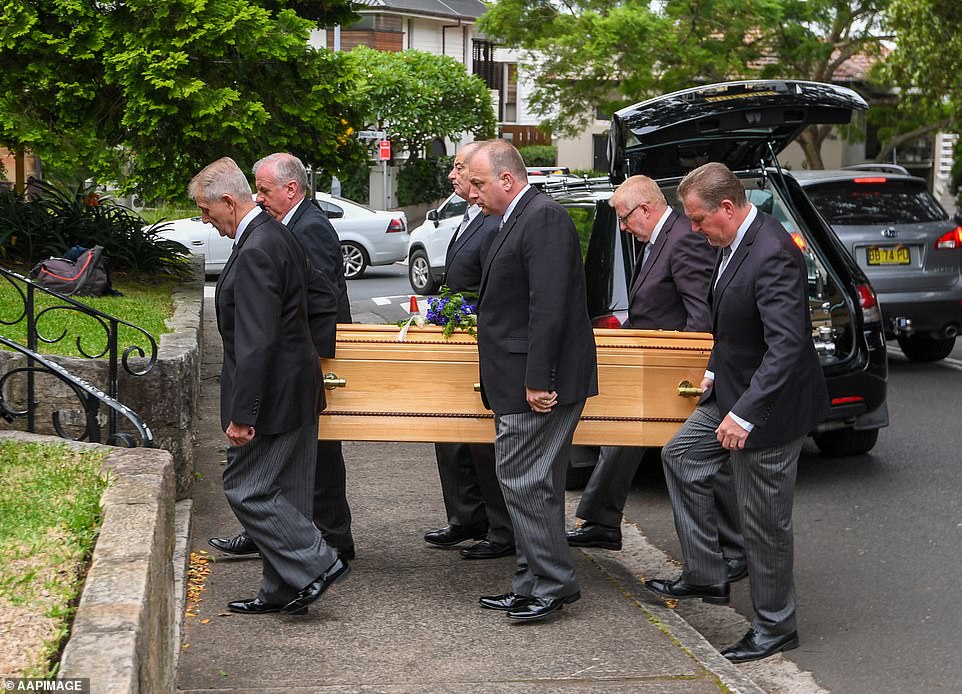 Mrs Laws’ coffin is carried inside the historic church

Crowe told mourners he and his neighbour at Woolloomooloo disagreed about many things but one subject was never up for argument.

‘We always agreed on Caroline,’ he said.

Caroline Laws, who died aged 82 after battling cancer, met her husband 69 years ago when they were teenagers.

The couple was introduced at a dance at a mutual friend’s home in Lindfield on Sydney’s North Shore in 1951.

Laws wrote of their early feelings towards each other in the funeral’s order of service.

‘I remember one on one occasion when we were in my Uncle George’s beautiful garden. Caroline was just 14 and I was 15.’

‘We were holding hands. And she just stopped walking… and said to me ‘I think we love each other’ … just like that. 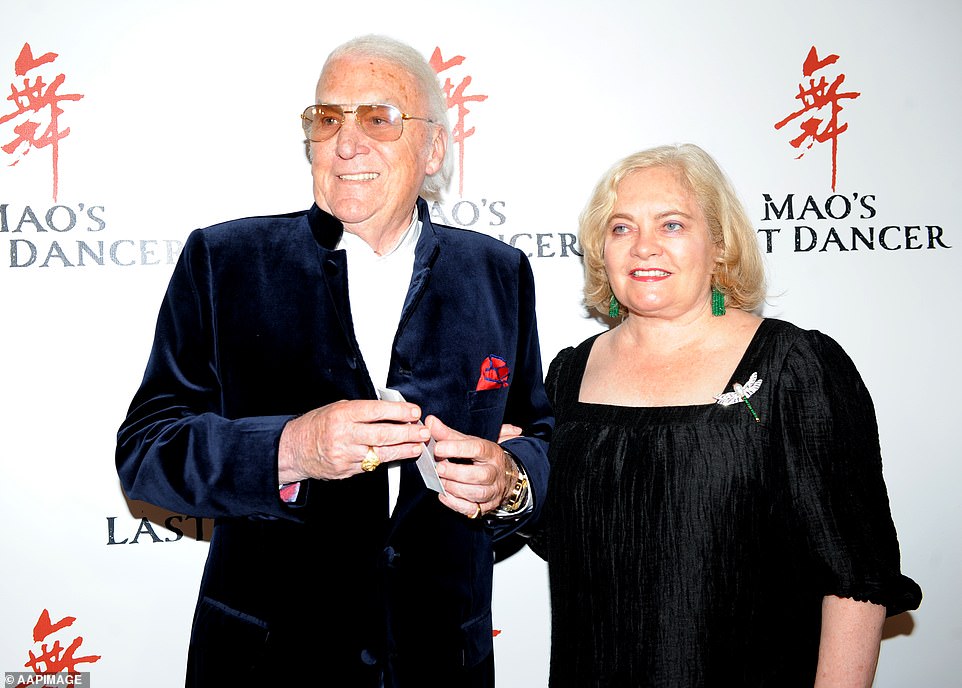 Mrs Laws, affectionately known as ‘The Princess, was diagnosed with ovarian cancer in 2016. She met her husband 69 years ago when she was 14 and the radio host was 16 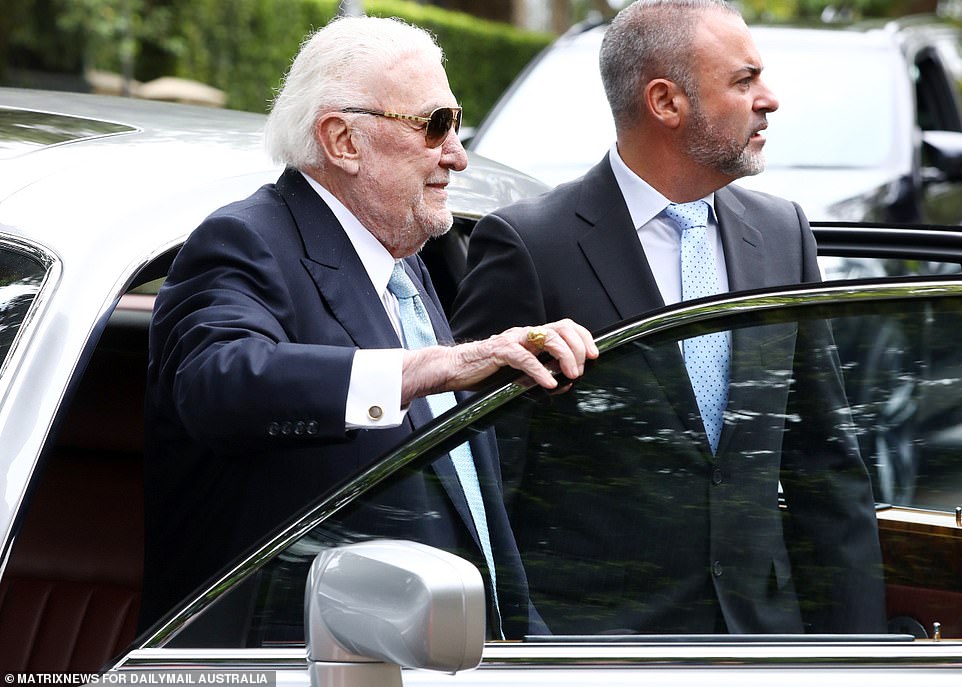 Laws as he stepped out of a chauffeur-driven Rolls Royce at St Mark’s Church in Darling Point, Sydney, on Tuesday morning

Crowe said he and then wife Danielle moved to Woolloomooloo Caroline was one of the first neighbous to welcome them.

Danielle was pregnant with the couple’s first child Charlie and Caroline was as thrilled with the news if he were her own.

‘She was bubbling with excitement there would soon be a baby in the building,’ Crowe told mourners. 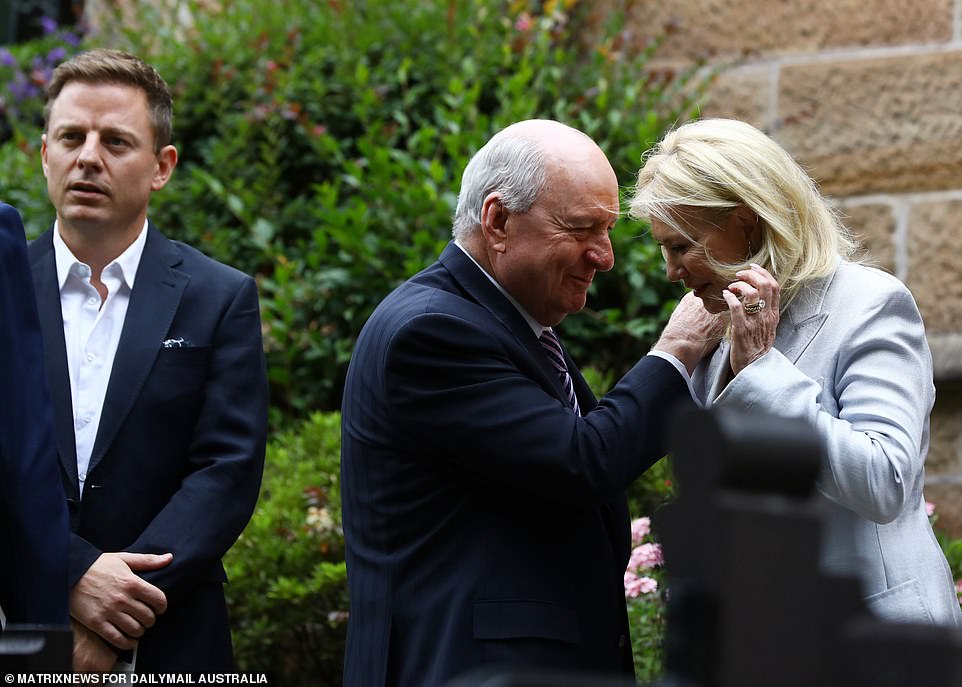 Among the who’s who of Sydney’s media personalities paying their respects were radio king Alan Jones, his 2GB colleague Ben Fordham (left), and Studio 10 host Kerri-Anne Kennerley, who was seen being comforted by Jones

When Crowe told her he and Danielle were naming their second child Tennyson and read her one of the poet’s love sonnets she said, ‘That’s how I feel about John.’

‘She was always warm and affectionate, interested in what I was doing,’ Crowe said.

‘She told me more than once that she was very proud of me and the work I did.

‘… Some days you really need to hear something like that.’

Laws told The Australian Women’s Weekly in 2016 that he loved his third wife at first sight. 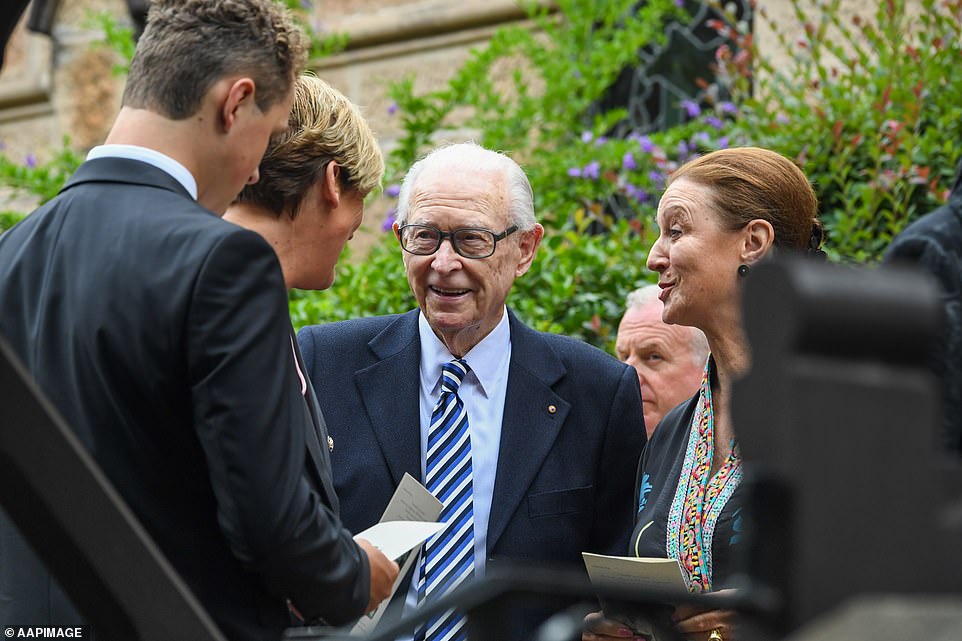 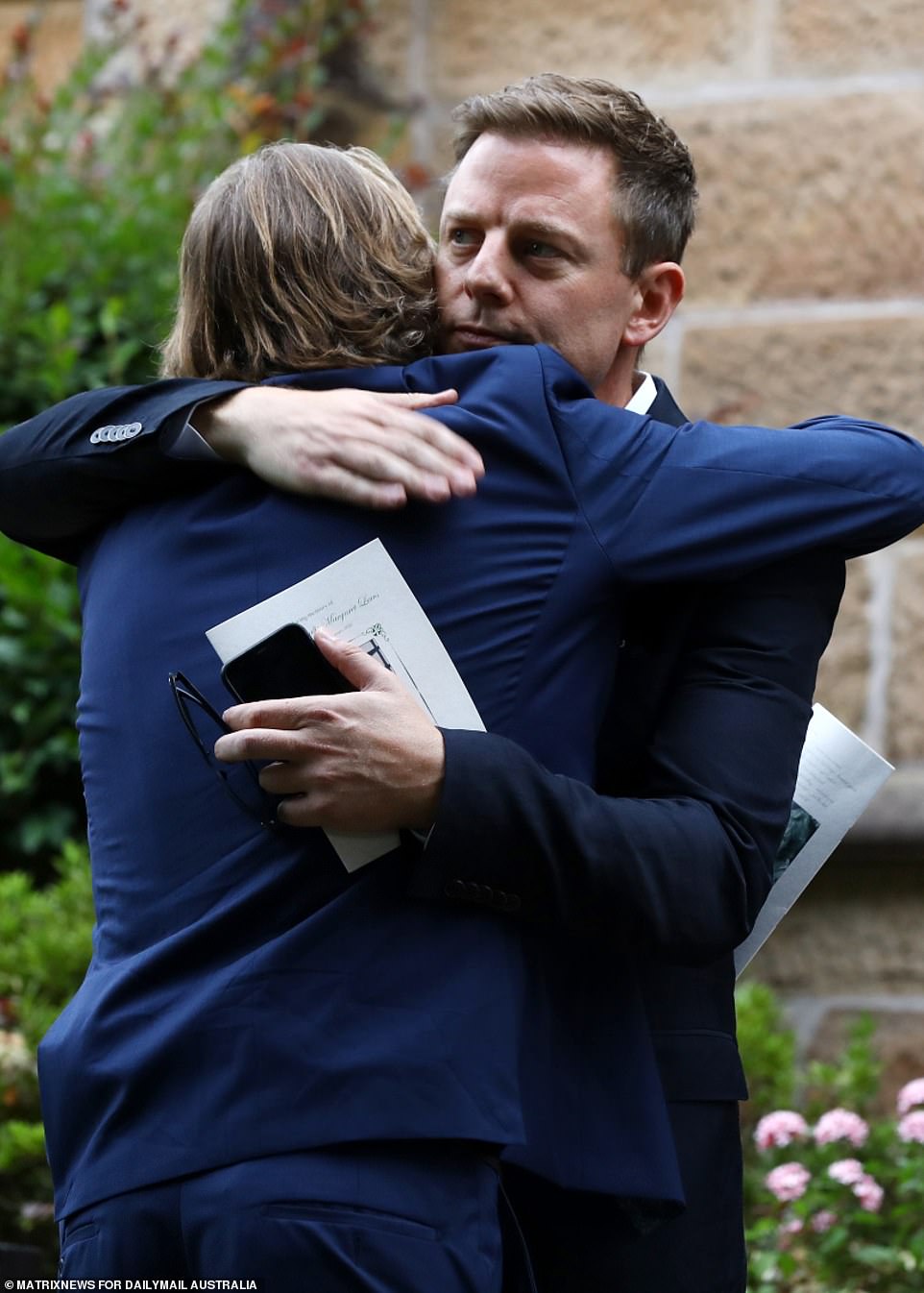 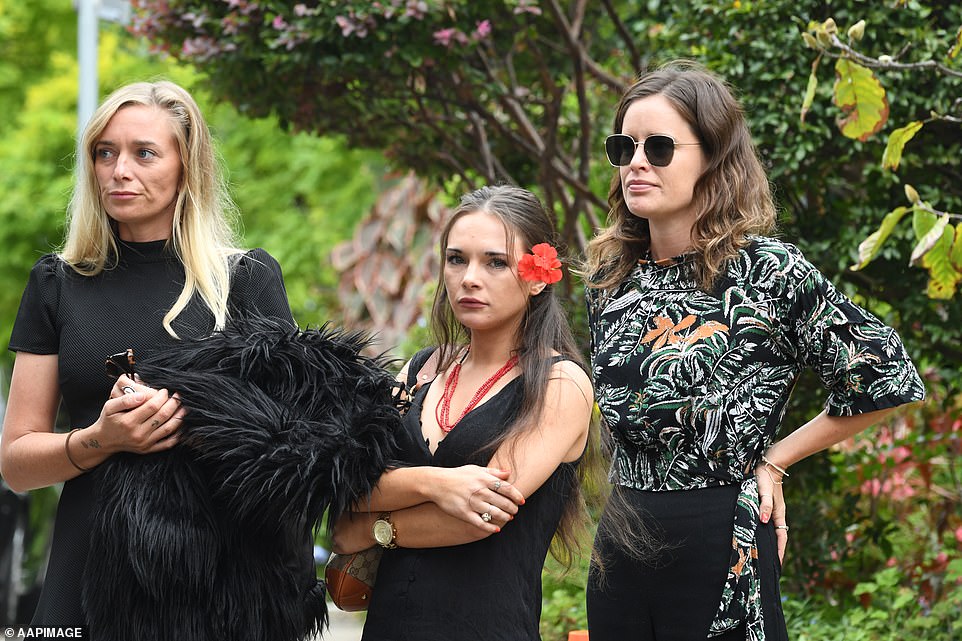 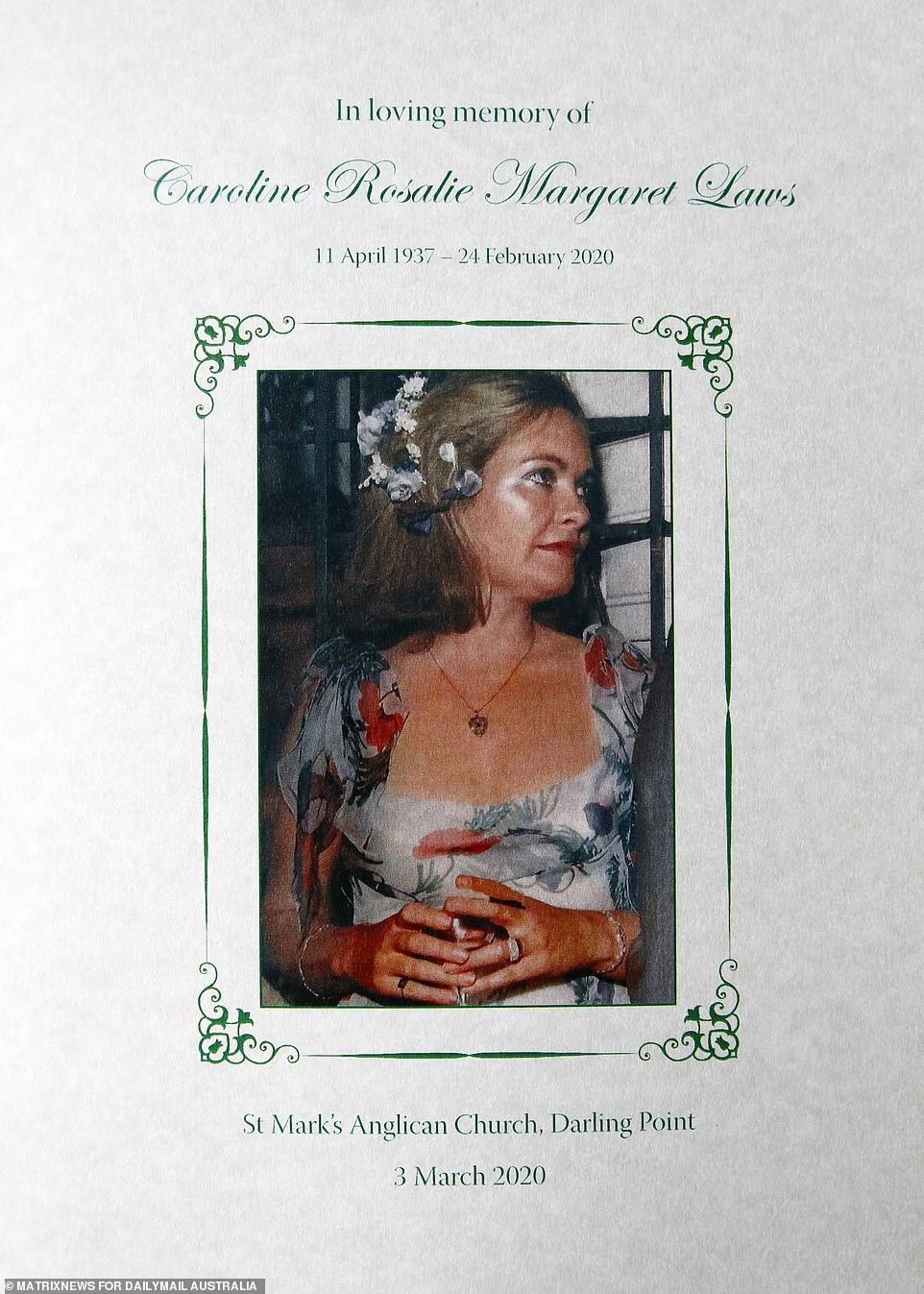 The Order of Service at Mrs Laws’ funeral service on Tuesday

The pair didn’t see each other for 20 years as Mrs Laws travelled to London to pursue ballet dancing and married another man.

Upon her return, Laws was a twice-divorced fully-fledged radio star and began to woo her.

‘As soon as she came back into my life that was it, she was the woman and we’ve been together ever since,’ Laws has said.

The ‘Golden Tonsils’ called Caroline ‘The Princess’ and introduced her to his audience through his popular talkback radio show on 2UE.

They married in 1976 and between them had nine children from their three earlier marriages.

Crowe said Laws and his wife became much more than neighbours to him. ‘John and Caroline are family,’ he said.

When Caroline blamed him if he and Laws had too much to drink he happily accepted responsibility.

‘They were and they remain a beautiful, inspiring love story.’

The service heard the couple enjoyed collecting art and travel. They were rarely apart. 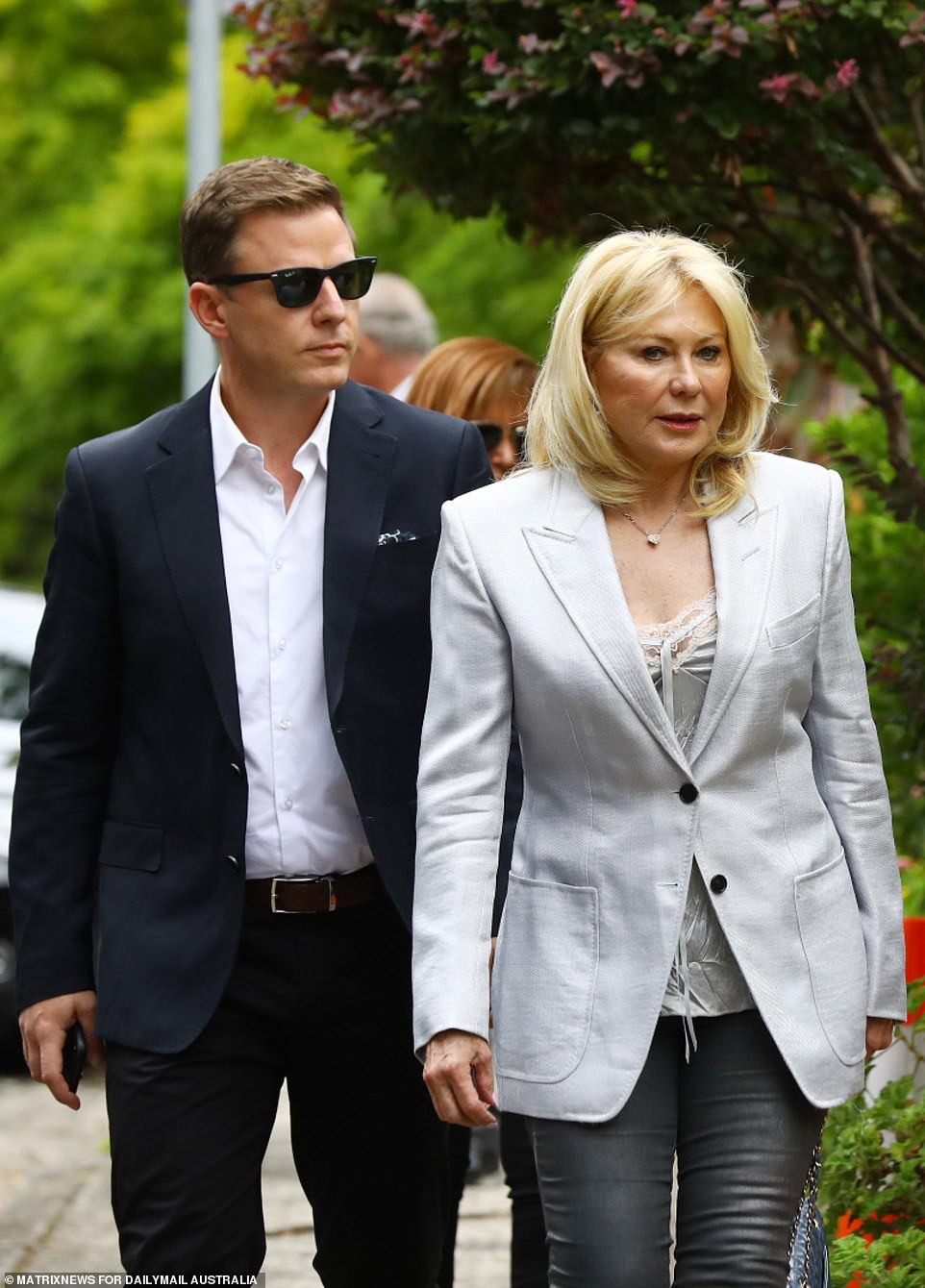 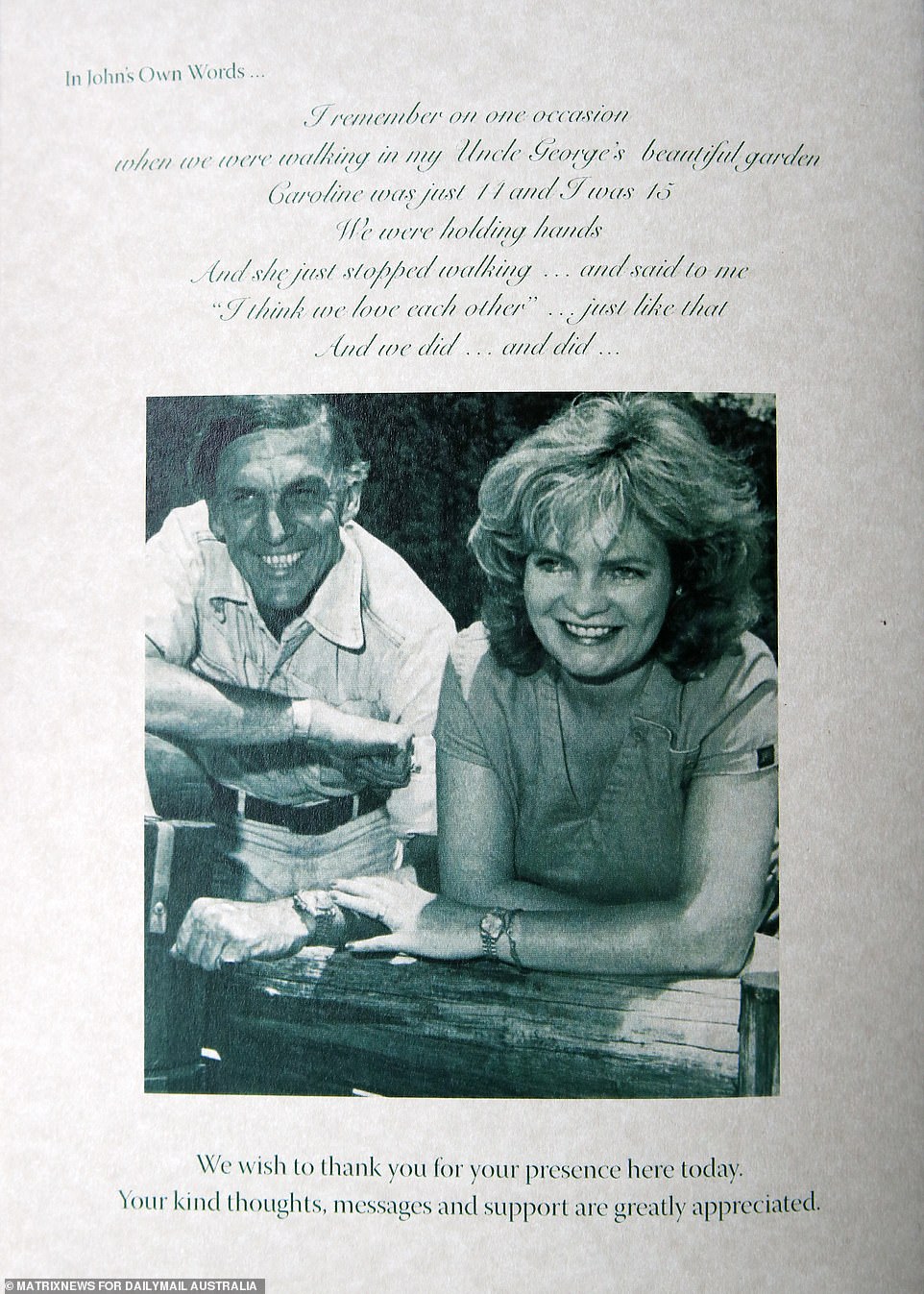 ‘I think we love each other’: A tribute by Laws to his wife was printed on the back of the Order of Service

‘We are just as much in love as we ever were,’ Mrs Laws declared in 1986. ‘It happened in the beginning like a clap of thunder.

‘Slow was the last thing it was. That’s my way – very much my way.’

Crowe recalled how the couple did slow down as they walked hand in hand along the Woolloomooloo wharf.

‘The stroll got slower but the love only ever got deeper,’ he said.

Once after returning from overseas he had witnessed them take a fall near their favourite restaurant Otto and had gone to their aid.

As he helped Caroline to her feet she had said, ‘Oh Russell, you’re home! How wonderful to see you. We’ve missed you.’

‘As if it was the most normal thing in the world for me to be picking her up off the ground.’ 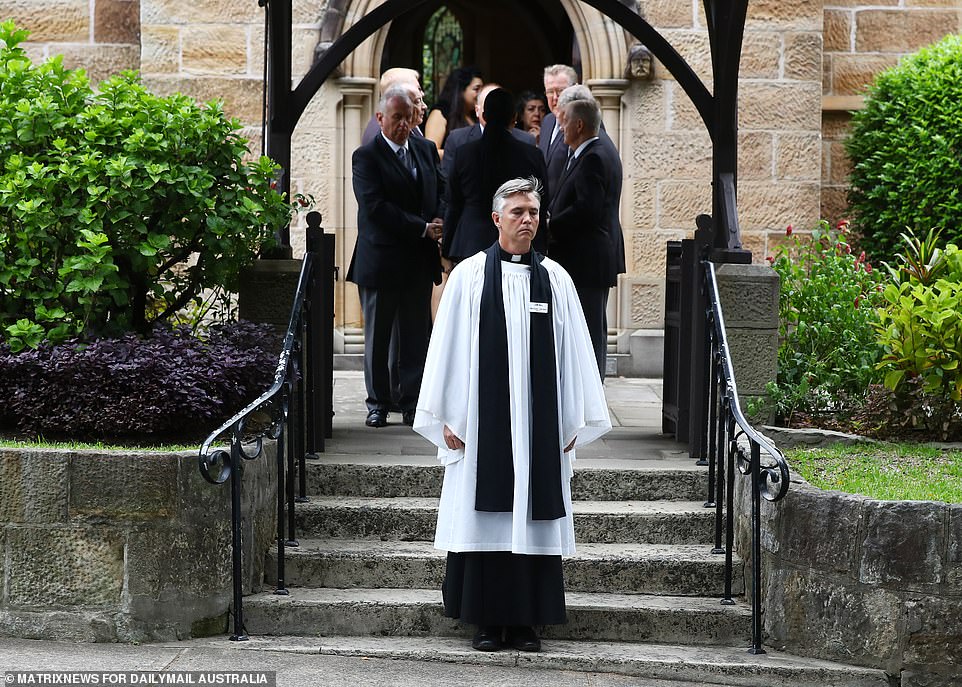 Caroline was hospitalised with bronchial conditions in Rome on the pair’s annual European holiday at the start of 2016.

About the same time Caroline was first diagnosed with ovarian cancer during a routine check-up.

Laws said after his wife’s death: ‘I am lost’.

Radio 2SM, where Laws now hosts the morning show, announced Caroline had died at the couple’s Woolloomooloo home on February 24.

The show’s Twitter page posted: ‘It is with a heavy heart, we announce this morning the sad passing of Caroline Laws – beloved wife of legendary Australian broadcaster John Laws. Vale Caroline Laws – you will be forever loved by all.’

Laws, now 84, retired in 2007 but returned to radio in February 2011 as the host of the morning programme on 2SM within the Super Radio Network owned by reclusive multi-millionaire Bill Caralis.

In a statement, the network said: ‘John referred to Caroline as his greatest confidant, doting upon her to his devoted listeners across Australia’.

‘On behalf of Mr Bill Caralis, the John Laws team, his colleagues at The Super Radio Network, and for those of us within the wider Australian radio industry, we extend our deepest condolences to John Laws and his family at this sad time.’

Rival broadcaster Ray Hadley, who used to fill in for Laws on his morning program at 2UE, also paid tribute to Mrs Laws.

‘She was an extremely elegant and delightful lady, and it would be impossible to even comprehend what John’s going through at the moment,’ Hadley told his 2GB audience.

‘I offer, with everyone else, our sincere condolences on the loss of his beautiful wife.’